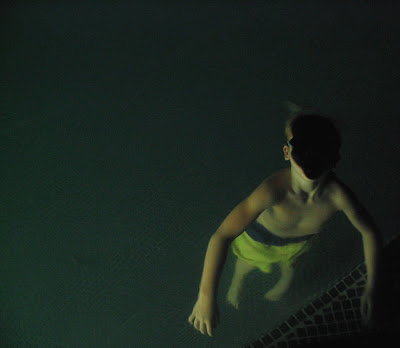 This is one of the creepier photos I've taken recently. I may do something more with it later. This is the untouched version.
I got nothin' tonight. Seriously. I've been in a roar of mental static for about a week. Some of it has been interesting stuff. Some has been worth writing down.
Some of it weighs like stone.
This happens occasionally, especially at the end of summer. Not nearly enough time has been spent in the studio, where I could let some pressure off. I tell myself that one day I shall escape this desert heat.
I tell myself to can it. Whaaa. Soon we'll be back at work, not moving like we're made of lead and all this will just be another summer survived.
If my worst problem is thinking too much, how bad can things be?
Not very.

If I have ice for my drink, how bad can things be?

Not very.
I also get that this sort of increase in mental activity is part of a seasonal cycle that begins to feel familiar. Some artists might describe it as the call of the muse, some describe a nerve-stripping, flesh crawling demon, some as simply the onset of psychosis.

I myself sometimes refer to it as Hyde. These days, I don't see it as a fire to put out so much as a storm to wait out, in as much comfort as possible.
Doe the ability to move from a moment of paralizing vision to making a list or taking out the trash indicate sanity or insanity?
I don't know. But it beats crying, tearing out hair or cutting off an ear.
Must artists be 'tortured artists'? Probably not, even if some are.

But even then I'm fairly certain the art and the torture don't have to happen simultaneously.

I took a break during the hottest part of the day, lying under the ceiling fan with Pete and watching STNG while Orion played "Sly Cooper " elsewhere, under two other fans. The commercial break, of course, left me thinking. I noticed a site gag in the "Enzyte" commercial I'd missed in the other 162 times I've seen it.
It's become nearly impossible for me to watch a commercial without imagining conversations around conference tables.
It's what happens when you watch television with Poppets. They're like little third eyes.
Awareness of certain things---like conference tables--once seen, can never be unseen.

I'm okay with that. 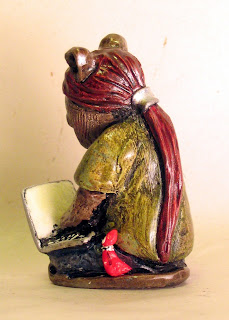 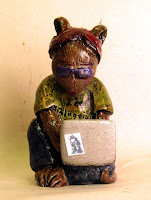 I instantly thought of the faceless pink poppet when I saw that picture of Orion! Creepy!!!

I love the glow on the computer screen, that is a very cool touch.

I really love this rat. I think it may be my fav yet. Ravyn and Vanda and Corsetted Rats RULE. (Neil Rats too).

I have to agree... that is one creepy pic. Nice job.

That picture is freaking my brain right out.

Yes, definitely creepy. It was purely accidental too. His face is above the water, so not illuminated. I thought of the faceless poppets too. I want to play around with the image---I think I can make it even creepier.
The funny thing is that when Orion saw it he said, "Wow. Creepy. Cool." That's my boy.

Thanks rubius! I like Blogger Girl too. I'll definitely come up with a version of her for an edition.

Er...so there are lights inside the pool? That's why the water is glowing but his face is in shadow?

I must admit that I almost didn't believe you about the photo being untouched. However, if you click to get the full resolution version, you can see just a few hints of his face.

Creepy and cool indeed. Thanks for sharing!

Craig: I would never purposely mislead you. But I don't blame you for questioning.
I didn't quite believe it myself..and I was there.