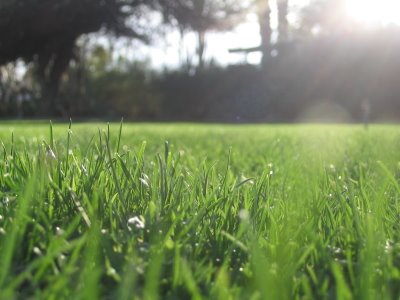 We spent the afternoon and evening at the home of Ben's grandparents, Silvia and Woody, where it was not cold at all, where the grass was soft and cool under our bare feet and the children ran around for hours.


The grown-ups connected in chairs under canopies, some drinking, some smoking, some eating from the buffet around the pool. Later, under night skies, I wandered between groups, hearing snippets of stories. They were the kinds of stories kept folded neatly away in back pockets, waiting for just such an evening.

I sat for a time with Woody, who tended bar. We talked about art and vision, and eventually got around to Death. I, having lived just long enough to have a concept of how much time I might have left and Woody, who turned 90 in October, are now bound as are any two kids who saw the monster under the bed. There is strength in numbers. 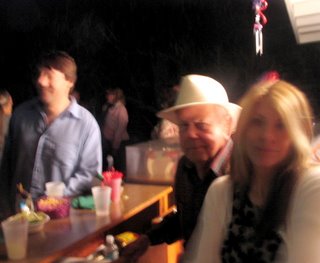 Ben took our photo but had a little trouble with the focus. It occurs to me now that, after a certain number of margaritas, this may be how we actually looked to him. 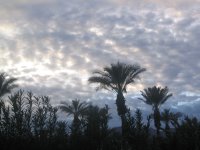 That's all I've got. Everyone's art is packed and on it's way. Tomorrow is for movies and Oreos.
Monday is a list I refuse to look at for now.

That grass makes me long for an inviting spring day. I just came in from taking down the outside Christmas decorations due to the fact that the ice finally melted enough to get all the cords loose, etc. I love the snow, but as these days creep on my spring fever is beginning to rise.

Palm trees not trees? What next? Someone gonna tell me tomatoes are a fruit or something?

Slightly off-topic, I just literally got back from seeing Pan's Labyrinth. Went to see it in the same battered, run-down local art-house theater that showed Mirrormask. This theater is good for movies of this reality-blending nature, and I have decided to only watch movies about little girls who wander off into Alice-esque fantasy lands to deal with some sort of real-life trauma at this theater from now on.

I may not be able to sleep tonight.

Between the excruciatingly violent "real" scenes, and the Jim-Henson-on-a-shitload-of-anything-he-could-find-in-the-medicine-cabinet-style creature effects, I may never sleep again. What a gut-wrenchingly beautiful and horrific and bittersweet movie.

If my tear-ducts weren't clogged with pure sarcasm, I might actually have cried a bit at certain parts. But the theater was dark, so no one will ever know either way, will they?