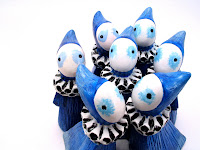 Our mail carrier is a very petite woman with a great disposition. More often now, she lugs our mail to the door in a bin that pretty much dwarfs her. Today I gave her a Poppet.

Poppet Planet is gaining its own dynamic. I think I began to really catch on when the Strange Studios dental insurance cards arrived. Bent and I must regularly redefine this animal we seemingly have by the tail. We've had a few months of very long work days and lots of decisions.
Hence, not so many blogs. I'd thought of blogging the experience as it happens. That would be sort of cool, right? On the other hand, it's really hard to grasp these life/professional lessons from inside. Most of them require the perspective of time. It's difficult to tell a story well without knowing the ending.

Lots of hard decisions. I'll tell you this though---one of the gleanings of late---I'm finding that when trying to choose between a this and a that, the best answer quite often is neither and both. 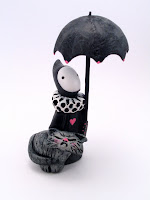 Quite the balancing act it becomes.

Hmm. Well, there you go. Maybe the answer to the blog or no blog question is to blog some.

I suppose that's what this entry is.

The largest box in the bin was from Neil. The first thing I did was to listen to it. Then I shook it and listened again. Bent and I took it outside to open. We immediatly agreed the estimate of 2000 was off. There are more. And they weren't completely dry, so opening the bag released a nice little cloud of....well, death. Yeesh. As bad as that was---thank goodness for dry desert air--experience teaches me that death is better than grape jelly as far as smells and dead insects go. Trust me on this one.

Now they're laid out on industrial sized sheets of aluminium foil in the sun. I'll have to keep an eye on them. Several things could go wrong at this stage, none of them good, from wind blowing them away to a bird feeding frenzy and any number of Gurtie or gardener related adventures between.

If enough of them survive the next couple of drying days, I'll make something---likely it will be for CBLDF. But we'll see. Technically, they're my dead bees now, but I'll always think of them as "Neil's Dead Bees." Just like "Neil's Dead Flies" and "Neil's Dead Cicadas" and...hmm...how about, just for fun, oh dear and brilliant one, send me something that isn't dead---like socks or candy?

I'll keep you posted on whatever 'bee' art transpires.

In the meantime, yes, we are working hard, if quietly, here in Palm Springs, with life going on all around and between. I'll try to blog about it a bit more often.

So far it looks like Poppet-wise March will be all about being Green, with a bit of having fun.
Get your Shamrock Poppets HERE! 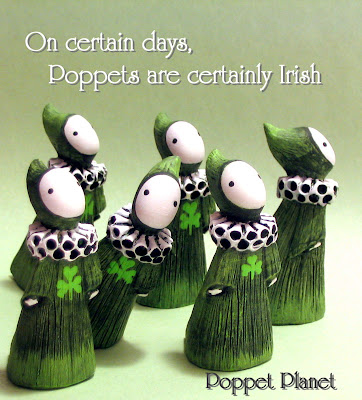 Wondered where you were, but had concluded the answer would be "busy".

Do you need socks? I like sending people socks. What kind do you like, and what size are your feet?

Where bees are concerned - rather you than me, but I look forward to seeing the results...

Thanks K! I lost my 'routine' several months ago and haven't established a new one yet.
But I'm working on it.

My feet are small, but I'm thinking that soon I won't be needing socks at all--the desert is all about flip flops.

aahhhhh, my poor little Kitty bees. i feel sad, but i know you will turn them into magic.
xoxo love my little poppet, thank you so much.
Kitty

Kitty! I'll keep you posted on any art made of Kitty's bees.

Hoorah for Links. Mr. G's page led me here, and now I am obsessed with the poppets. How lucky to have bees for a medium...

Welcome to Poppet Planet, Kaycee! Join us at the Poppet Planet Forums, where our community of poppet people is constantly growing. Get yourself a poppet and photograph it and send it to us for Poppets on Tour. Or just say Hi :-).