Day 70 was Sunday. I finished painting the wedding gown. Aubrey will photograph it soon. It takes a certain sort of energy to take a paint brush to someone's wedding gown. It takes a certain audacity. It's not the sort of thing one can slog through. It's not the sort of brush stroke that can be applied shyly.
I'm pleased with the work, but afterwards, I was too tired to write about it. 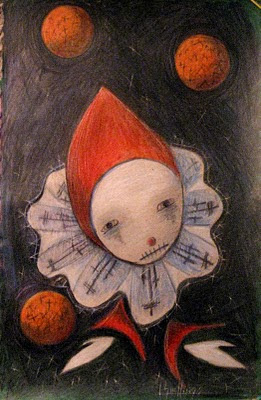 Now it's day 71 and Monday. It started with a visit to the doctor and lots of blood tests to help find out why I feel not at all the way I'm used to feeling, which is to say, to have the audacity to paint a wedding dress on most days. It turns out that I'm anemic, to start. And maybe that's it. I'll take that. That can be fixed.

Possibly I'm going through a colored pencil phase. Possibly it's because they are easy to carry around with me.

I remembered a bit from a Margaret Atwood novel, Bodily Harm. It came to me when I started this drawing and again this evening. Strongly enough that I looked it up to see if I was remembering what I thought I was. It took me awhile to find it.
I was.
Here is the bit:

...he was an accident that happened to me, like getting run over by a truck, I was just in the way. I had to live with him, but like a broken leg, not like a person. I stopped trying to work out in advance what would make him happy or not or mad or not, because I never would be able to work it out, and I stopped thinking it had a whole lot to do with me. If he hit me it was like the weather, sometimes it rains, sometimes it doesn't. He didn't hit me because I was bad, like I used to think. He hit me because he could get away with it and nobody could stop him. That's mostly why people do stuff like that, because they can get away with it.
I don't know why this passage came to me or how I associate it with either the drawing or the cracked jack's balls. Except that it's a child's memory. No matter. This is the sort of thing I'll figure out eventually or not. It's enough to acknowledge it. It's sort of like headlines when I make papier mache from newspaper. You don't see them in the finished work, but they're in there, for sure.

Confused... I haven't read that novel, I am sure of that, and still that quote is very familiar... guess it must be famous in some way...

Diandra: I don't know if it is, but it sure resonated with me. Possibly because it holds such truth. I'm not sure I'm strong enouth to label this one 'silly humans.' It's too close.
One day.

a Twitter friend posted this article, and it made me think of the following quote:

Every once in a while, that verse floats to the top of my memory. Maybe this is just one of those days.

I'm sure the doc recommended iron supplements, but I wanted to chime in with a suggestion. While in Germany and pregnant with my first, I became anemic, the doctor there recommended Floravital (http://www.floravital.com/)

It's available in US health food stores and online, and it's really wonderful.